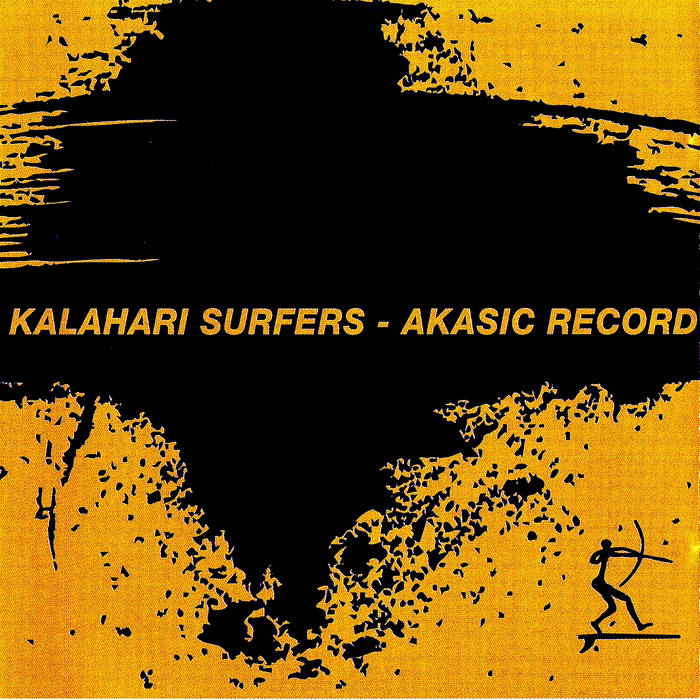 hilbert Love all the tracks on this one, mesmerising and easy to listen to all day long Favorite track: Dig It.

Mail&Gaurdian Dec 23 2009 - 20 Most important albums of the decade:
#8. Kalahari Surfers -- Akaśic Record
A highly sophisticated foray into African-flavoured dubfunk, released in 2001, this was Warrick Sony's first solo album for a decade. His mesmeric 12-track soundscape (in Hindu philosophy, "akaśic " refers to the rose-tinted dream state that follows accidental death*) blends high-tech digital production with live bass, drums, keyboards and guitar -- all played by Sony -- and traditional instruments including tabla, udu pots and other African and Asian percussion. Several tracks feature samples from the music of Namibia's Himba people and rhythmic clapping by the Khoisan. It measures up to anything in its genre on the world stage. -- Drew Forrest
-----------------------------------------------------
* Akasha (orĀkāśa, Akash, Aakaashá, आकाश) is the Sanskrit word meaning "aether" in both its elemental and metaphysical senses.These records are described as containing all knowledge of human experience and the history of the cosmos past present and future.
en.wikipedia.org/wiki/Akashic_records
-----------------------------------------------------
Kalahari Surfers CD sleeve notes - Akaśic record
You are holding a record of all events, actions, thoughts and feelings that have ever occurred or will ever occur these recordings come from the earth-ether, music from the memory of what was, what is and what will be , impossible dance music from a confused planet - ancient raid routes / trading parties, rhythms rhymes ‘n embargos, party killers –a fragment ,
a moment of a performance dragged from it’s fixing in time,dragged ‘n pasted like a poster on top of another frozen moment in the passed - looped’nfiltered – movies, drama, TV evil eye, bursting buildings fling flung into the air dust settling dust memories hot dry beats - Loop Street -Processor street Ambush street / call us criminals/ call the firebrigade - music from the movies / thetha msawawa /southern people – from ghettomuffin from Gugulethu with thanks, from Mandela Park / rhythms from the most precise, the most difficult, the genius ,the master Alla Rakha : 17beat cycle ( shikar tal )_ maximum respect Ravi’s other half /we let the camera pan across the hills of Ulundi / Zulu Maidens singing a song about how they’d like to marry a white boy so that they can go up in an aeroplane./ fragments of Tagore floats ‘n filters through Ganges rhythm / Bengali devi / Laksmi Devi Dasi / goddess of fortune / she’s got a gun / they bomb’n pound the herdsmen- like Vietnam / vietminh / ask questions later there’s a war going on in my favourite region-deep history-deep culture / the record of all that is, has been, or will be. the invisible light, the basis of all. The record tracks its being to Chaitanya Charan Dasa playing tabla , mridangam to the hippies at Woodstock / Dig it Man /digit digital /to Ulundi /infradig / Taako and his old mother lean against a wall and sing for the camera / Kunene river ruined in the future / behind them we drive for days / bushmen sing in Afrikaans language / clapping a nine beat cycle / learned from SADF days of strife / special mix originally for the MELT 2000 Bushman project / Matthew 26:"Put up again thy sword into his place: for all they that take the sword shall perish with the sword."
bushman on a surfboard / the ancient meets the modern /Himba herdsman - walking praise cattle / destroyed sacred gravesites / the connection to their past / eat vegans / only meat / like Masai / reject western ideas / hold the fort / Each thought, silent or expressed, has its own immortality, an Akasic record / listen to Noise Khanyile / zulu jive session king unsung hero from Joburg to Kwa Mashu / he sings here an appeal to his ancestors /what have I done? forgive me my wayward ways / we sprung him from prison (Lloyd’n me ‘n Jah Bongo in the late 80’s )- this is a special tribute to a him the natural player of violin / mandolin/ guitar / Hambe Khahle - Puzushekela -Mfuzenyama-the Maskande traditions live on / Lesego Rampolokeng / where are my words? We’ll have to drop in some from your mysterious past / with permission of course / where are and the Gugulethu Two?/ where are they today? / Hambe Khahle : MilesDavis remembered on this somewhere /also the Inkspots let me take your feet off my doorstep recorded in the 30’s / Fzappa also was part of my own akasic record - whoever finds the Zappa sample will get a free download of another Surfers album! send answer to warrick@kalaharisurfers.co.za

tracks with an asterix* are from a body of work for a documentary called “Ochre and Water” dir Craig Matthew & Joelle Chesselet –which chronicles the plight of the Himba people of Northern Namibia – for further info contact them at doxa@doxa.co.za