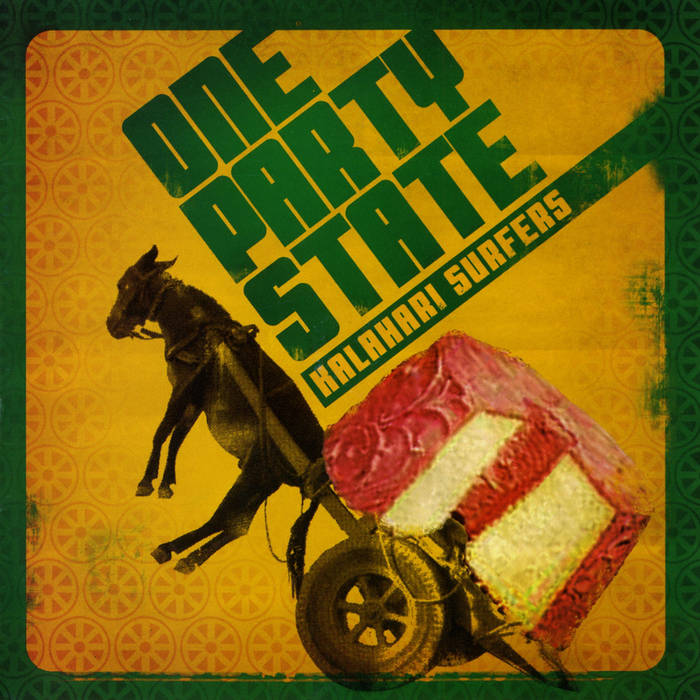 Long after most of their musical contemporaries from
the 1980s have lapsed into silence or irrelevance,
the Surfers are creating music that is perhaps more
influential now than ever before. The Kalahari
Surfers were the original South African “Dub
Scientists” and their rhythmic and sonic explorations
continue to influence a new generation of electronic
producers because of their fascination with the
possibilities of using the studio as an instrument, and
their investigation of the spatial qualities that can be
suggested through the creative use of the mixing desk
and effects units. But the Surfers are much more
than an exploration of dance rhythms and studio
techniques; their albums are important expressions
of neo-Dadaist South African sound art.
What is not widely recognised is that the Kalahari
Surfers are not a group, underground or otherwise.
The Surfers are an evolving audio project by the
composer, producer and musician, Warrick Sony. In
the early 1980s, when Sony started the Surfers project,
the anonymity offered by a fictional band gave him
the imaginative space to operate during the bleakest
and most repressive years of the apartheid regime.
The mask of a fictional band also allowed Sony to
approach the Kalahari Surfers as a collaborative
endeavour, using his production skills to record and
remix an astonishing range of vocal and instrumental
performances from figures in the South African
underground over the last twenty-eight years. This
latest album includes contributions by the legendary
jazz guitarist Alan Kwela, and a haunting vocal
track by Sarah Jane Mary Hills, better known as the
bassist from the KZN alt-rock group, Sunways. But
it is the collaboration with the South African post-
Fanonist poet, Lesego Rampolokeng that is central
to One Party State. Rampolokeng’s dark, often abject
visions have featured in several Surfers albums.
However this is the most successful collaboration to
date. Instead of treating Rampolokeng as a rap poet,
Sony has approached the recording of his poetry
as a source of raw material, extracting resonant
and cutting phrases from the tsunami of the poet’s
verbal tirades. Like Dambudzo Marechera in postliberation Zimbabwe, Rampolokeng anatomised
the predatory and authoritarian leanings of the new
elite at an early stage in South African democracy;
and his vision is matched by Sony’s highly political
treatment of sound.
Since his first Surfers release, a spray-painted, fourtrack
cassette called "Gross National Products" , produced in an Observatory student commune in 1982, Sony has
treated the Surfers project as a space for experimental
sound design, stitching complex layers of irony and
questioning into the fabric of his compositions
through audio cuts-up and samples over the spatially
conceived Dub rhythms. Rooted in the analogue
tape-splice techniques of early Music Concrete and
sampling from a rich garnering of field recordings
and media excerpts, the Kalahari Surfers’ work
constitutes a Dadaist sound archive as well as a
Science of Dub production. The compositions on
every Surfers album preserve the detritus of South
African popular culture like the bus-tickets and
printed ephemera in a Merz sculpture by Kurt
Schwitters. This practice of treating found audio
was always an inherently political practice in South
Africa under apartheid: a sometimes brutal exposure
of social contradictions or an undercutting of the
bland surface of official propaganda that led to
restrictions on the airplay of Surfers music and,
in the case of the Bigger Than Jesus LP in 1989, a
government banning order. Now, with the ominous
turn to a rhetoric of “information control” and
“media tribunals” by the ruling party, the political
urgency of this approach to South African sound art
is suddenly relevant again. More poignantly, the final
track on the album, “Play Around with the Buttons,”
splices Eskom advertising jingles with a recording of
an SABC outside broadcast unit trying ineptly to
transmit a live speech by Nelson Mandela. The grim
irony of Mandela’s speech lost in transmission by the
incompetence of the state broadcaster is presented
through a subtle manipulation of the live recordings.
And as a special bonus, the album features a “hidden
track” which first appeared at the Dada South?
exhibition in 2009. Entitled “Pigs at the Trough,”
the track is a montage of chanted ruling-alliance
slogans, mixed into the vividly recorded grunts and
wheezing of pigs guzzling slops. The contradiction
is as crude as any of the visual clashes in a John
Heartfield collage; and perhaps as necessary in these
pivotal times.
----Pof Christo Doherty-Art South Africa Jan2011
(Christo Doherty is Professor and Head of Digital
Arts in the Wits School of Arts, University of the
Witwatersrand. He is also a photographer and video
artist.)
-------------------------------------------

Well, the firebrand Warrick Sony is back — and he is angry. With his new album, One Party State, Sony returns to the overtly political song structures he created in the 1980s, but with a dystopian dubstep edge added to the mix. Sony is on the attack and he has the ANC-led government firmly in his sights. Lock and load. “I am feeling a rage that I haven’t felt since the bad old days,” says Sony. “A rage at being the joke of the world, being ashamed to be from here again is too much. “We have something approaching anarchy with a government so wrapped up in criminal prosecutions and court cases and infighting and backbiting that it is hard for it to find time to govern,” he says. “I have been feeling that a lot of the idiocracy going on now is not unsimilar to what we were dealing with in the 1980s. The kind of ‘Should I cry or should I laugh?’ moments with our political personalities that are very familiar to a lot of us who were creating artistic work during the apartheid years.
LLOYD GEDYE - May 07 2010 16:55 Mail&Gaurdian
__________________________________